In the 1950s the psychologist Solomon Asch devised a study to investigate whether peer pressure can be strong enough to change our perception, and make us believe in things that are not true. To do so, he set up a clever experiment on conformity that raises questions about our ability to think freely.

Look at this line.

And now, look at these three lines. Can you tell which of them matches that first line? And how sure are you ? Hold that thought and listen to this story.  Because most people can get this wrong.

Once upon a time, on the eve of a major religious holiday, a seven year old boy was observing his grandmother as she poured an extra glass of wine. When the boy asked who the glass was for, she said that it was for the prophet.

The boy didn’t believe her, so his uncle told him to just observe the glass closely. Full of expectation, the boy watched the glass intently, and suddenly, he thought he saw the level of wine drop just a bit!

In 1951, decades after the incident, our boy became a pioneer in social psychology, determined to rationalize what actually happened that fateful night. Did some of the wine really disappear, or was he made to believe that? To find out the truth, he devised an experiment to investigate whether peer pressure can be strong enough to change our perception, and make us believe in things that are not true.

Solomon Asch’s conformity experiment was conducted with 123 white, male college students who were told to be part of a study in visual judgment. Each student was introduced to a group of 6-8 other students, who were, in fact, actors who already knew what the experiment was about.

The group was then gathered in a classroom and shown two cards. The first with one line, the second with three lines on it. Each student was then asked to say aloud which line in the second card matched that first one. The group was seated in such a way that allowed the actors to respond first, leaving the real participant to respond last.

For the first two rounds, the fake students, also known as confederates, gave the correct answer and the innocent student, known as the subject, said whatever he thought to be true. In the third round, the actors began to respond with a clearly wrong answer. For the next 12 rounds, dubbed “the critical trials”, all the confederates would give the obviously wrong answer. So the innocent student could either ignore the majority or ignore the truth. So what did the experiment tell the researchers?

Upon completing 18 rounds with all 123 subjects, the experiment came to the following conclusion. 23% of the students always gave the right answer. 72% conformed to the majority at least once. And 5% completely succumbed to peer pressure and always gave the obviously wrong answer.

Asch’s work also showed that if just one other acting student responded correctly, the effect of peer pressure decreased substantially. The experiment also showed that the opinions of three peers are enough to influence a student to change his mind. Increasing the number beyond three confederates, did not increase the levels of conformity among others. Or put differently; if 3 people say something obviously wrong and there is no one to disagree with them, many of us agree with the wrong answer and start lying, due to our deeply human desire to fit in.

Since then, Asch’s experiment has been successfully replicated many times and the effect remains significant, especially among women and homogeneous peer groups.

In 1955, Asch famously said: “The tendency to conformity in our society is so strong that reasonably intelligent and well-meaning young people are willing to call white, black. This is a matter of concern. It raises questions about our ways of education and about the values that guide our conduct.”

what do you think?

What do you think? Would you have conformed or stuck to the truth? Do you see the Asch’s effect in your daily life or in social media? And what can we as adults or educators do to give young people today the strength to stand up and speak the truth? Share your thoughts in the comments below!

You can try to replicate the experiment within your class. To do so, you can draw Asch’s 4 lines, or an optical illusion (see below) onto a whiteboard. Prior to class ask 7 of your students to act as confederates. When you start the class ask your confederates first so they can give the clearly wrong answer. Then ask the rest and record how many students gave the correct answer. After you are done, play our video and see if your and Asch’s findings on conformity were similar.

Which line is longer? 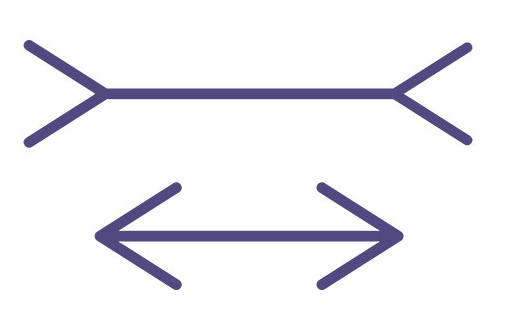 Note: The Müller-Lyer illusion is an optical illusion consisting of three (or two) stylized arrows. When viewers are asked to place a mark on the figure at the midpoint, they tend to place it more towards the “tail” end. The illusion was devised by Franz Carl Müller-Lyer, a German sociologist, in 1889. Read more

We explain complex concepts through simple cartoon animations and add ideas for real-life projects. Jeffrey just joined us on Patreon (see below). You can too. Help us create more learning experiences that educators from around the world can freely use in their classrooms!

New videos to your inbox

Made with by Sprouts Learning Co., Ltd.
Limited rights reserved, 2021.

Made with by Sprouts Learning Co., Ltd.
Limited rights reserved, 2021.